Crafter Central to the Rescue!

As some of you know, I have an Etsy shop called Aunt Mayme’s Attic.  Yes, I love working on it.  And some of you may know that Etsy has filed an application to “go public”.  This was just about the time I felt I had come up for air, with all the recent changes to the site.  SEO, Listing Changes, Categories–improvements that Etsy feels are necessary, and so do I for the most part. Recently, those changes have been many; maybe because of their upgrading.  At any rate, I commend Etsy’s courage to press on in spite of the comments made on both sides of the fence.

But lately I’ve been feeling like I’m a “minnow in the big ocean of fish”, mostly because I’m a small shop, with less than 150 sales, and I’ve been at it for quite a while–since August of 2012.  When you’re up against other shops that have sales in the thousands and ten thousands, you can feel alone out there.

I’ve been struggling with what Etsy considers to be “relevant”; even doing several things to improve my listings and views.   I’ve taken workshops, been on teams, was in Holiday Bootcamp and all those things I was encouraged to participate in; even starting up a Facebook page, and becoming more involved in social media.  And I’m still swimming–madly–trying to keep up.

But someone’s thrown me a bit of food!  Yes, this little minnow fish, in that big “ocean”, has been spotted by Crafter Central, www.craftercentral.com.   Art, (along with his wife, Steph, the two people involved in creating the site) contacted me, saying he loved my items and would I consider being part of CC’s next craft showcase.  Yes!  Of course!  (this little minnow was doing the “Happy Wiggle”)

What does this mean?  Well, on March 14-15, an online showcase will be presented showing 10 vendors and their respective shops; either through Etsy or their own website.  And I’m one of the 10!  Little ol’ minnow me! Here’s the link:  http://www.craftercentral.com/artists-for-alex/

Crafter Central also has featured artists who contribute, and as well as posts tips for selling on Etsy.  They are giving away wonderful door prizes, (you should have seen the ones from last time!) during the Showcase, and I’m participating, because I feel what they are doing is a good thing.  What am I donating to the giveaway?  Well, here it is: 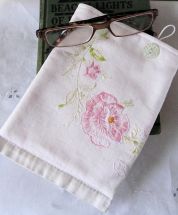 An e-reader sleeve in such a cute package!  Pink inside, and the cute mint green buttons outside.  See it here: Crafter Central Giveaway

Does all this cost anything?  No.  All Crafter Central asks is that we donate a portion of our proceeds during the showcase to a charity called Alex’s Lemonade Stand.    http://www.alexslemonade.org/

Alex’s Lemonade Stand is an organization that supports children with cancer.  It’s a win/win for everyone, and Art and Steph have really been great to work with.

Now my little minnow “end” was really wiggling!   My very, very first job was having a lemonade stand and making enough money to go to Disneyland twice that summer!  (that dates me…)

So come on, folks, get your pennies together and buy something so I can donate to a child in need, and you won’t go unnoticed.  I’ll post about it here; with your permission, of course!

2 responses to “Crafter Central to the Rescue!”